WHY TOYOTA CONTINUES TO DOMINATE THE INDIAN AUTOMOBILE INDUSTRY

The Japan Based car brand – Toyota, has taken over the Indian market over the past decade with an unbelievably high increase in their sales. By 2018, India was ranked to be one of the most profitable markets for Toyota in the world. Up until the latter half of 2016, India occupied a rank of 16th most profitable market for Toyota and by the end of the same year, India jumped to the 12th position. By the end of 2017, the ranking had gone up to the 11th and it is predicted that by 2021, India will be occupying one of the top 3 positions.

WHAT MAKES TOYOTA SO POPULAR AMONG THE INDIAN CONSUMERS?

1. After years of obsession with smaller, more compact cars, Indian consumers began to demand more and more SUV cars that can withstand wear and tear. The new models that Toyota put out to the Indian market were able to meet these exact demands of the consumers.

2. Toyota is one of the few companies that have been successful in delivering cars that are reliable, utilitarian and strong at a lower price point. Toyota cars at such a reasonable price appealed to the Indian crowd which led to Toyota cars being sold like hot cakes throughout the nation.

3. Toyota has come to be seen as an intelligent investment in terms of yield and reliability. Their high-quality features and benefits led to car sales in India to skyrocket. Toyota car sales saw a 9% increase in sales in the year 2018 alone!

FEATURES OF TOYOTA SERVICE THAT APPEAL TO THE INDIAN CROWD

Cars like the Toyota Fortuner and Toyota Innova continue to be bought by Indian consumers even after years of their launch. Toyota cars give you comfort, toughness, and strength at an affordable price. Toyota cars have been known to last for several years which is why people see it as a long-term investment.

1. The servicing provided by the Toyota Servicing Center is very customer friendly and profitable to the car owners. The facilities are very sophisticated and professional. Many car brands have failed to deliver the same servicing facilities to their consumers.

2. On the other hand, Toyota cars, especially SUVs require very minimal maintenance which obviously means that the buyer will have to spend less money on servicing compared to another car brand.

3. Another reason for its popularity is its high resale value. This is because Toyota cars are well-known for their durability. So even when one is buying a second hand Toyota Car, he/she is willing to pay more due to its reliability and durability. Therefore, people often take into consideration Toyota’s high resale value while buying.

Indian consumers have preferred Toyota over other brands because of its user-friendly features. These cars are designed to give you maximum benefits and convenience. Over the past decade, Toyota has become one of the biggest car brands in the Indian market. 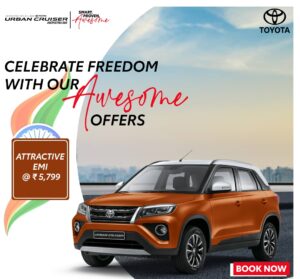